A Celebrity Sighting, a rant and Remembrance Day

Last Fri night, I have an opportunity to meet up with a recent Ironman. Bold returned to his home country (the land of beavers and Tim Hortons) for his sis’ wedding. I met up with him for dinner.

In true fashion, he wore the newly acquired Ironman Finisher shirt with pride. Also in true fashion, when triathletes meet, all we talk about is nothing but training, nutrition, gears, mentality. I asked a lot of questions.

I am very fascinated with his race result. His pacing and nutrition was dead on. He did not hit the wall on mile 20 in the run. We all know that’s where the real race begins. Where you have to dig deep.

What I most impress about Bold is that he is the same person in real life and on his blog. After dinner, we walked around Toronto for a while. Talked more about life, career and more training.

It was great to meet another triathlete with the love to just go and have fun. I am sure I will bump into him in a race in the future. 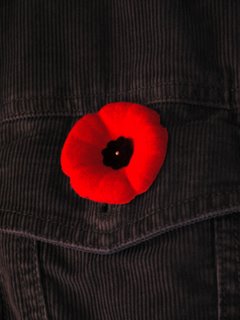 Now here comes a rant. In Canada, November 11 is Remembrance Day. It is the day we remember those who give up their lives to fight for freedom. Our veterans. To honor them, we were a red poppy.

I was listening to a chinese radio last week and the host was stating that we shouldn’t be wearing a red poppy at all since it has nothing to do with being Chinese.

I didn’t give much thought about it until over the weekend.

i) We live in Canada and should respect this country’s culture and tradition. Yes, we have free rights to say whatever want.
ii) Canada sent 2000 troops to defend Hong Kong when Japan invaded in World War II. Even Britain at that time felt the colony was a lost cause. Outnumber and out gun, the Canadian lost. They fought valiantly, never the less, fighting for a colony they don’t even know.

iii) During World War II, China was too busy fighting among themselves than against Japan. The two parties involve, the Communists and the Kuomintang, saw each other as bigger threat than Japan.

iv) We live in a global community. I find it odd how we still have people think in such narrow terms.

v) Remembrance Day is to remember the veterans. That’s what that day is for. I wonder how the host will react if someone call them up and say that they shouldn’t celebrate Chinese New Year b/c he lives in Canada. To discuss this topic during this time is not appropirate. I got a feeling the host just use this topic as a way to raise controversy and bring ratings up.

….I need to find the radio show website and send an email…

On a side note, I was at the pool during Remembrance day. A grandpa was swimming in my lane and noticed I got a big scar on my stomach. I told him I had a liver transplant a long time ago. How I came from Hong Kong. If my family didn’t migrated here and with free health care, I wouldn’t be here.

He told me ‘son, you are very lucky’. Indeed. I swim the rest of the day thinking about that.