Again, the kingdom of heaven is like a merchant seeking beautiful pearls, 46 who, when he had found one pearl of great price, went and sold all that he had and bought it.Matthew 13:45-46 NKJV 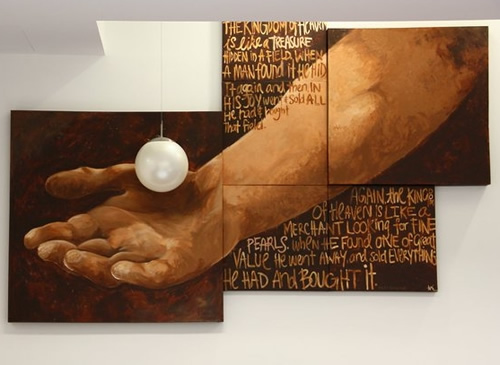 The picture is taken at OMF International Headquarters.  If you see closely, you will see that the pearl is actually a light.  Quite ingenious! 🙂

Last week, Wai Jia and I met up with a young Christian couple for dinner.  Over dinner, we shared about our journey on how we followed Jesus.  When the couple realized that I sold everything to come to Singapore, they were astonished.  One of them shouted, ‘that’s like the parable of the pearl.’

Before coming to Singapore, I spent a lot of time dwelling on the cost of following Jesus.  When Jesus shared this parable, and the one before this (the parable of the hidden treasure), did He really mean what He said?

Since coming to Singapore, Starcraft 2 is what I do for fun.  It is a computer game I played since I was in High school.   Three weeks ago, during one of the weekly talks with my wife, she sensed we ain’t seeking as hard as we should.   We talked where we were spending our time.  Well, Starcraft 2 was on the discussion.  Without hesitation, I told her I would fast Starcraft 2 for two weeks.  To my wife credit, she also fasted from something she consider important to her as well.

For some of you, you might think this is a childish thing for a 30 something to spend his time playing a video game.  In Singapore, I do not have many things I do on my downtime for fun.  We don’t have a tv at home (which I don’t mind because I don’t watch tv).  I don’t follow sports.  I have very little leisure activity.  During this fast, once in a while I would want to justify in playing. Everyone deserves down time right?  This is not a bad thing.  I need a break once in a while.

I remembered Wai Jia telling me a story of one of the missionaries.  The missionary wanted to collect fishes as a hobby but the Holy Spirit forbid her to do so.  When she went to the Lord to protest and stating that her friend (another missionary) had six hobbies, the Lord replied: “Even with her six hobbies, she still put me first.  If you have the fish, you will not put me first.”  Ouch. Sometimes the conviction of the Holy Spirit is sharp and deep.

I am now almost a month Starcraft free.  It is so much to justify I need to play or I need to _______ [Insert your fun things to do: shopping, eating out, movie, tv shows/dramas, video games etc.]  than to dedicate ourselves to the Lord.  I remembered what’s at stake here: a little video game or the Kingdom.

Last night, I led a little Bible study with Wai Jia.  She’s currently my only student (and my guinea pig hehe).  We were studying the Parables of the Sower.   In particular, we were discussing about the seed in good soil that grew thirty, sixty and a hundred-fold.  Looking at Wikipedia about this parable, some commentaries said that the difference between thirty and hundred fold is dependent on the response of the seed.  In order words, those of us who are the good seed can determine how much fold we want to produce.   If you want to serve God, do you really want a thirty fold? Or a hundred fold?  Of course, a hundred!  We both agreed we wanted a hundred fold.  So what’s the difference between the thirty fold and those of the hundred fold?  Well, it means we have to prepare ourselves even more.  We have to dig deep. We have to focus.

Before fasting from Starcraft, I always complain to Wai Jia I never have enough time.  Never have time to pray. Never have time to read the Bible.   Now that I am fasting, I have a lot more time on my hand. I realized that giving up some fun time is what’s needed in order to grow and groom myself spiritually.  The reality is that we only have 24 hours a day.  If we want to do something, we have to sacrifice something else.   With this in mind, if we are to invest in the Kingdom totally, we will have to sacrifice even more.  There’s no easy way.

This goes back to the parable of the Pearl. In which I ask myself lately, is Jesus and His Kingdom worth everything I’ve got?  Even at the cost of my time, energy and things?  Is everything really means everything?  Definitely yes! There must be no compromise.  It is all or nothing. Even at times when I missed playing Starcraft, I found a new joy in blogging.  In praying and in reading the Word.  🙂

Again, the kingdom of heaven is like a merchant seeking beautiful pearls, 46 who, when he had found one pearl of great price, went and sold all that he had and bought it.Matthew 13:45-46 NKJV