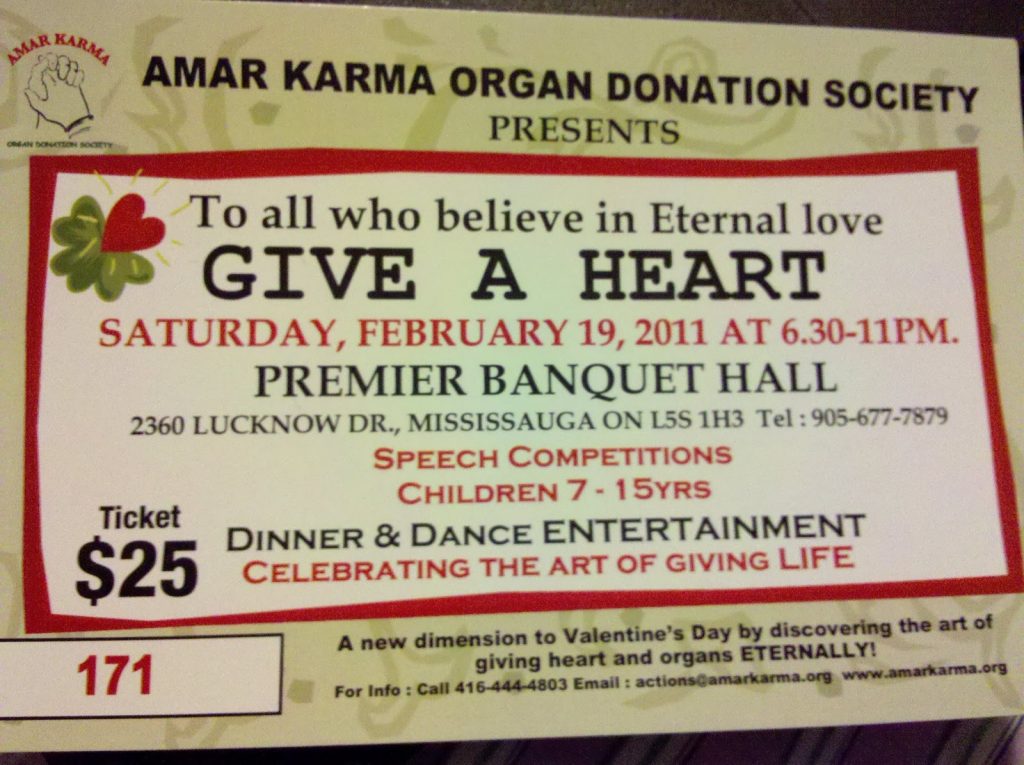 Tonight, I had the honor of attending Amar Karma Organ Donation Society‘s Give a Heart event.  The event was to raise awareness of organ donation in the South Asia community.  One of the coordinators asked me to come and shared about my transplant and Ironman experience. It was a great time.  There were many kids using poems and personal sharing to address organ donation and appeal the crowd to sign up on an organ donor card. 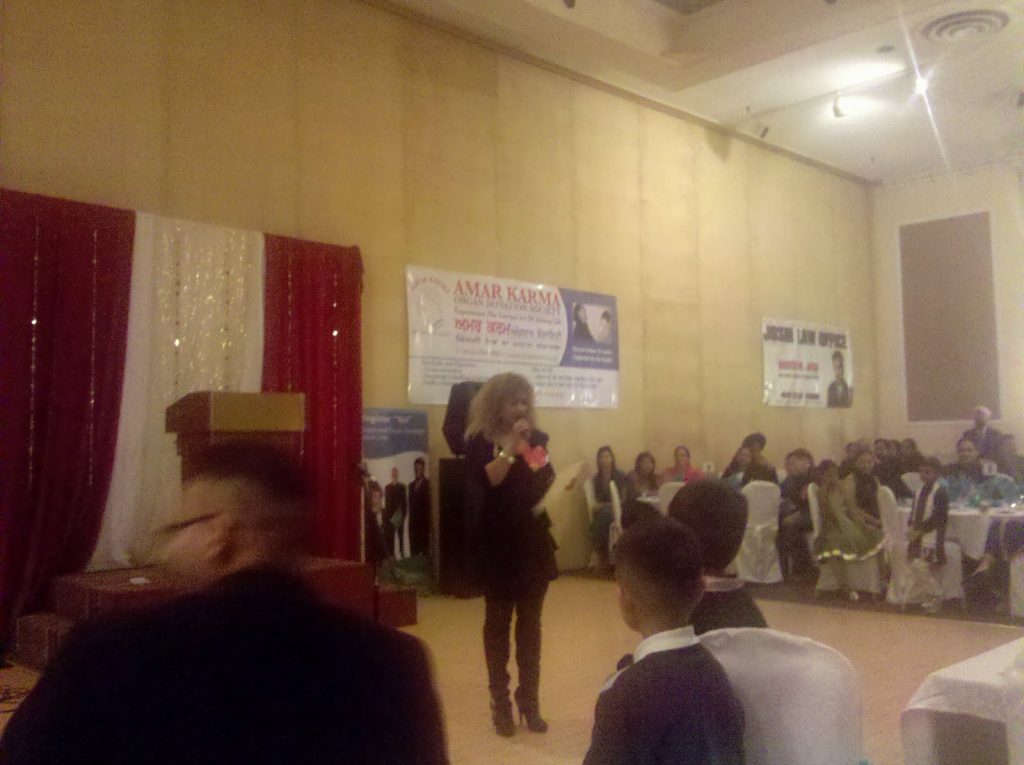 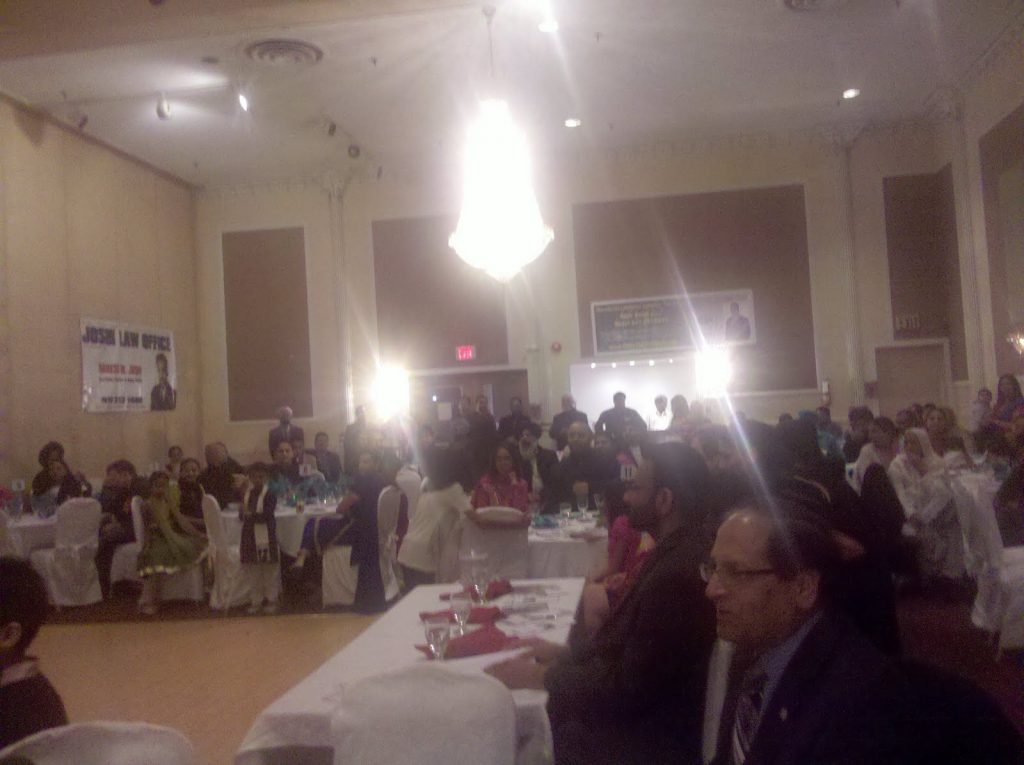 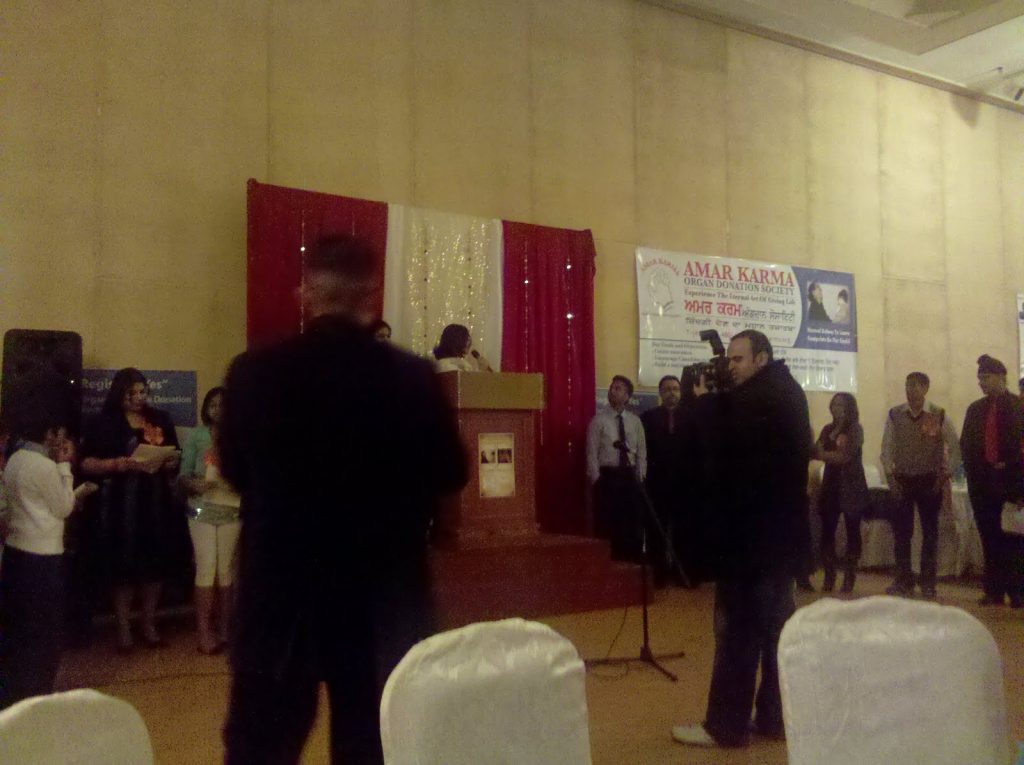 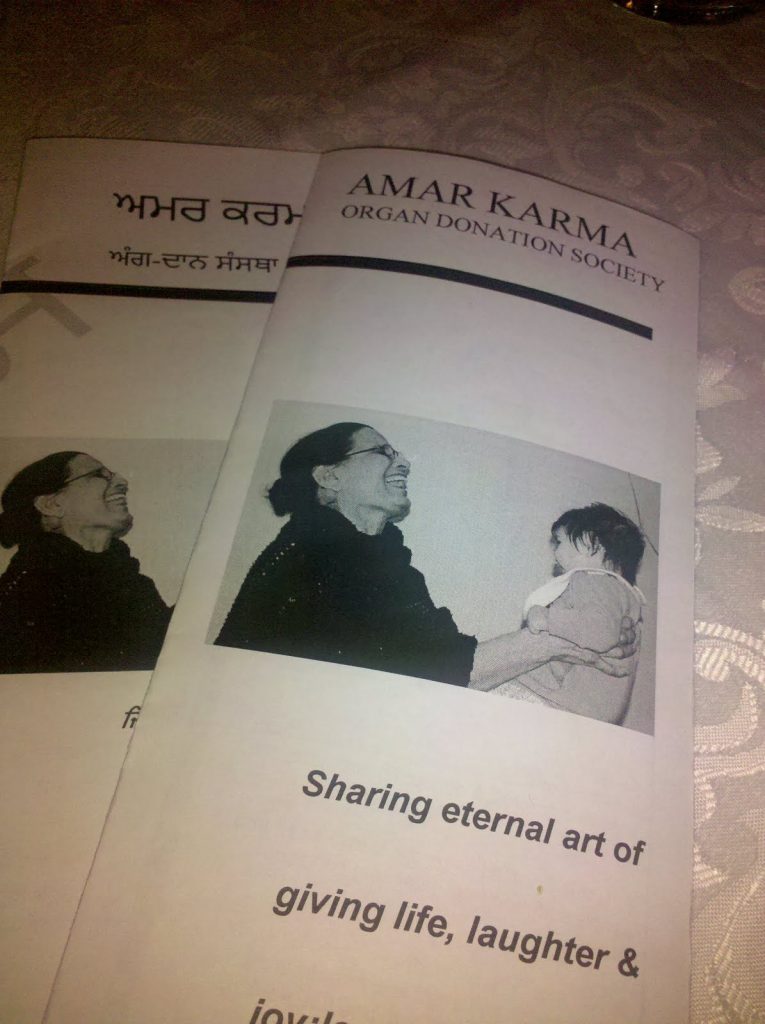 Heres’s my script for tonight….

Hi everyone, it is an honor and a privilege to come and speak in front of all of you.  I like to share with you how organ transplant save my life.

The reality is that I shouldn’t be here at all.  I should be six feet underground.

I had cancer when I was 11.  It was in the liver. I will start off back in 1988, like many of you, my family immigrated to Canada.  I was from Hong Kong.  In 1990, my family decided to go for a physical check up.  Since it was our first time going for a physical, the doc decided to have us do some blood work.  All my family results come out fine.  Except me.  Some of my numbers were off.   So he suggested to send me to Hospital for Sick Children in Toronto.  There, they discovered that I had a tumor in my liver.

You see, I was perfectly healthy and fine ten year old. I don’t have pain or anything. I was riding my bike, playing sports, going to school. I was normal.  Since the tumor is closed to a blood vessel,  instead of cutting a portion of the liver off, they suggested to my parents for an alternative, liver transplant.  They will wait and put me on the waiting list.

A lot of people asked me if I was afraid.  To be honest, at that time I wasn’t even know how serious cancer was.  They told me I had cancer.  I was still healthy.

So after four five months of waiting, my mom got a phone call one evening after school.  They find a suitable donor for me.  We drove down to Sick Children.  I was being prepped for operation.  I remembered as they wheeled me into surgery room, they asked if my dad want to kiss me.  I am not sure about south Asia culture, but Chinese culture, it is not often parents show affectionate.  I think that’s the first and the last time he kissed me.
The operation lasted for 13 hours.  I remembered getting up I was so weak and tired.  I was in Intensive Care Unit.  There were tubes coming out of me or going into me.  There were many machines monitoring my health.

I spent three weeks in the hospital before I was sent back home.  I remember those times, I was in a ward with other kids in tranpslants.  You see, back then, in 1991, transplants were still a new technology.  Some of the kids were very sick. At least sicker than me. I remember there was one kid from South America.  He had a liver transplant, two kidney transplants and they added a third kidney in him.  Unfortunately he didn’t survived.  There was also another Asian baby with a liver transplant.  He didn’t made it either.
In the ward, I was known as the miracle child.  After a transplant, your body might reject the new organ.  It thinks that because it is foreign, it will try and attack it.  Plus the body after going through such a major operation, it gets very weak.  There could be a lot of complications.  Yet, I was fine.  I wasn’t worried b/c I was too young to realize what was going on.

My experience at Sick Kids were awesome. It isn’t like a hospital. I spent a lot of time playing video games.  Afterwards, I would go to the hospital, go for tests and what not, and head back home.  This becomes a norm for me.

I will be pretty honest, because I am so normal, there are times when I forget I had a liver transplant.  Even though I have this big scar across my stomach, I don’t remember.
In 2005, I decided to do a triathlon.  A triathlon is made up of swim, bike and run.  I also for some reason, looking back, it is crazy.  I wanted to do an Ironman Triathlon.  The distance is insane.  It is 3.8 km swim, 180 k bike and a 42 k run in 17 hours.  To illustrate the distance…(80 laps pool, Kingston to Scarborough, run to Burlington).
It’s long.  Even now thinking about it, its really long.  Who in the right mind will run a 42 k, marathon, after riding for 180 k bike.  But at that time, I was just naïve, or very stupid. For some reason I thought if I can learn to swim, learn to bike and learn to run, put it all together, I can do an Ironman.  I have to learn a lot of things. I had to learn how to swim again.  I was swimming so bad, that in a swimming course, the coach split us up into three groups.  There were the fast people, there were the slow people, and there was me.  I was so slow I had my own lane :D.  When I first learning to swim, I can’t do more than 2 laps.
A lot of people ask me what’s my motivation to get to the end.  To be honest, junk food was my motivation.  When I was running, I see a lot of ppl on the side eating pizza and fries.  When I was training, I had to eat very healthy and I feel sorry for myself.  I want real food. I want junk food.  So the finish line, it wasn’t some glory motivation for others. I just want to get to the finish line and have a slice of pizza.

I also had the priviliege to represent Canada.  With those who have transplants, there are such things as World Transplant Games.  These are like Olympics for Transplants.  In 2008, I participate the transplant games in Canada.  These are for Canadians only.  It was pretty funny because I was the only one in my age group and I entered a lot of races.  So I was getting first place by default.  Mississauga News wrote an article about me that I must be lonely at the top because I had no one to compete against.  In 2009, I went to Australia to represetnat Canada.  We would compete against other transplant athletes around the world.  UK, USA, China, Japan, India, Parkistan.  Everyone and everywhere.  At that games, I won a gold for 5 k running race and a silver on 5 k bike time trial.
Looking back this is quite a remarkable story.  At that time, in HK, there were no transplants.  If my parents decided to not migrate, I won’t be here.  My family were considering immigrating to USA or Canada.  If we migrated to US, my family will have to pay for the transplant.  I believed a transplant operation, without treatment and medication afterwards, cost at least 100,000 dollars.  There’s no way my parents would have the money to afford such an operation.  In Canada, our medical and health care takes care of the cost and expenses.

I always see this life as my second chance.  A lot of people only have one life to live. I got two.  I was 11 when I had the liver transplant.  I am turning 31 in April.  My doc told me they give me 6 months to live with the cancer.   Isn’t this incredible?  I am very thankful and grateful to be living in Canada with a health care system and passionate nurses and doctors willing to make a difference in my life.

I want to say that transplant works, cancer is beatable and I am a living proof.  I know to sign up for a donor organ card is a very personal thing.  I am thankful for the family in 1991 who was willing to let go of their love one so someone like me can have a second chance.  I thank you for coming out today.  By being here, it shows that you want to learn more about this.  It is incredible how my life unfolds.
Thank you.

For more information on organ donation in Ontario, please go to Gift of Life website.