Why is this so long? What is this? A marathon?

These were the words coming from Anners, whom just completed her first marathon. And she kicked my butt. She finished it in under 5 hrs. I did it in 5 hr 18 min, which according to the race, 98% of female finished before me (now that’s a good self esteem booster). 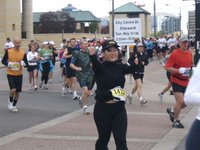 I got up early and headed over to the starting point. Woah, there were a lot more people than I thought. I walked around and managed to bump into Anners before she started. She gave me a high five. I showed her a ghetto sign that I made. Ok I didn’t made it. I just scribbled GO ANNERS GO. I managed to get a shot of her in the first 1 km before she head off. Good stuff. 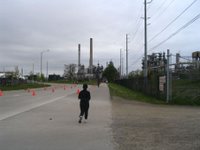 Exchanges were greeted. The course was winding its way to my city’s industrial area. Hmm…nice fumes coming out of the refinery plant.

Passed one water station and I asked if they have beer….hmm beer is always good 🙂

Into 30 km mark and we start hitting to the finish line. There were some rollers and some hills. By then, we didn’t converse too much. I think Anner was focusing on the run. She had been already 3 hr plus on the road and her hamstrings were killing her. I read another blog whom another runner just run beside someone to motivated them. I was playing that role. Just making sure I don’t run too fast for her pace and walked when she needed. 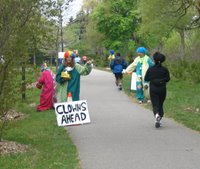 There is a point in a marathon where you have a gut check moment. Every part of you don’t want to run, even part of your brain wants to quit. But for that small speck in you, it just wanna keep going. This persistent spirit. The inner fire. I am sure Anners was feeling that. We all gone through it. We either push through it or quit. There is no other way around it. The point where we define ourselves. The point where when we look ourselves in the mirror, do we see someone that quits or someone who refuses to give up.

The weather was brutal. We ran along the lake and the wind hit us hard. Marathon is not suppose to be easy :)….but I don’t know. In the pics, Anners seemed to enjoy it. 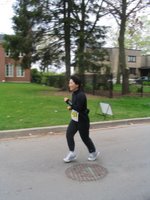 I could tell Anners was hurting in last 6 km. She told me her stomach ain’t feeling well and don’t want to drink or eat gel no more. I don’t know her hydration strategy. Since the day was cool
and we only had 6 km to go. We just kept going.

In the last few km, we actually picked up the pace. We passed a 2 km race that was about to begin. They put the 2 km race with the marathon which I thought that was really weird.

Bumped up with her b/f and her friends afterwards. Anners was super stiff…we ended off the day with beer n wings.

Here were some of my observation and thoughts along the run:

1) I thought about my own marathon. Also I thought about the day after I swim 4 km, ride 180 km and do this crazy run to this crazy race call Ironman. Ok sign.
2) We passed more people than people passing us. Good sign.
3) She didn’t walked too much in the last few km. Good sign.
4) To take those pics, I had to run in front of her. When I dropped the hammer, I DROP the hammer. Is it from all those hill runs? Good sign.
5) I got my long run in (calves were quite stiff) and see my friend finishing her marathon. Better sign…
6) Having a friend kick my butt….GREAT SIGN :D. 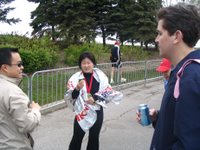